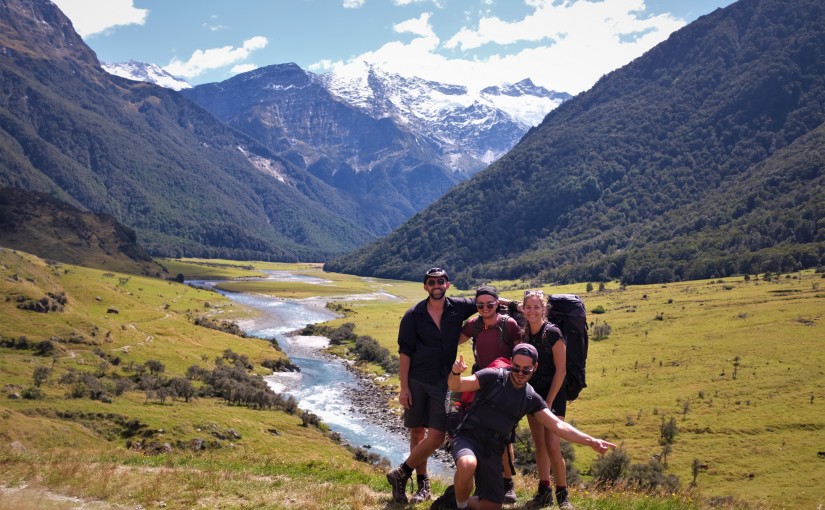 It only takes about 30 minutes of hitchhiking in the dark with a bottle of wine in hand to question if you’re homeless, a vagabond, or in for a night of fun. Luckily, I found Melo in Queenstown that afternoon and had good company to contemplate life with on the side of the road. Our conversation soon proved that I had made a good decision to reconnect. A few cheers, and swigs, later we found ourselves en route to the city excited to enjoy the local nightlife. It’s funny how good company can easily make a bad decision appear great.

We strolled into the town confidently, chests touted, in search of Melo’s travel mates from his prior months in New Zealand, Janick and Celiene. Thirty minutes later, we discovered them stumbling along the boardwalk, beers in hand, enjoying each other’s company. What aspired to be a night clubbing soon turned into a night of drinking and laughing on the shore of the lake. We bumped into some local buskers and I had to opportunity to spin fire for the local crowd and new friends. Our night ended at the infamous Ferg burger and a short taxi ride later we found ourselves stumbling back to our tents, entirely drunk and content with the evening.

After hostel hoping the next morning in search of a free shower and wifi, we settled on our plans to travel to Wanaka to catch Roy’s Peak at sunrise and then depart on a three-day trek up Matukituki Valley. The weather forecast had worsened, however, so I opted to rent a car for our journey up to Wanaka to spare our group two long days and two sore thumbs. While I enjoy hitchhiking, hitching a couple hundred kms in the rain with four people isn’t exactly ideal. I picked up the car, we packed up camp, and departed on to our next adventure.

After a night of camping in the rain and a two-hour scenic drive we found ourselves in Wanaka, aka – Heaven. Imagine a quaint mountain town abutting a giant clear glacial lake; gelato shops, cafes, and bars lining the main boardwalk; mountain-bikers sending every jump-like-barrier with towering mountains in the backdrop. Imagine sunny days posted up on beach with free wifi and a gentle warm breeze from the west. Imagine being thirty minutes away from some of the most epic mountain biking, kayaking, hiking, skiing, and off-roading New Zealand offers. Imagine… Queenstown wasn’t looking so hot anymore.

After a rainy day of laundry, showers, burgers, and getting kicked out of cafes we pitched our tents just outside the city excited to hike Roy’s Peak the next morning. A cyclone from the past three days left a fresh layer of snow on the peak which only strengthened our resolve to beat the sun to the summit. Next thing I know, it’s three am and time to hike.

I felt like a spring rabbit when we hit the trail head. My empty stomach and tired body were ready to hit the mountaintop to enjoy some well-deserved granola and coffee. The first thirty minutes were grueling, however. The 12% grade, new-mooned darkness, and sheer persistence of the track had me looking at my watch every 90 seconds. Eventually, I submitted to the misery and began to enjoy the fire road that winds eight kilometers up to the 1,600 meter summit. Our group quickly found its stride and an hour in we started passing other sunrise-seeking wanderers. Two hours in and six kilometers later we hit snow. A fresh centimeter turned into two and then five and then twenty. Soon after we lost the track, and taking Melo’s lead, spent the last thirty minutes directly ascending towards the summit. At 6:15, we were the first to hit the peak. 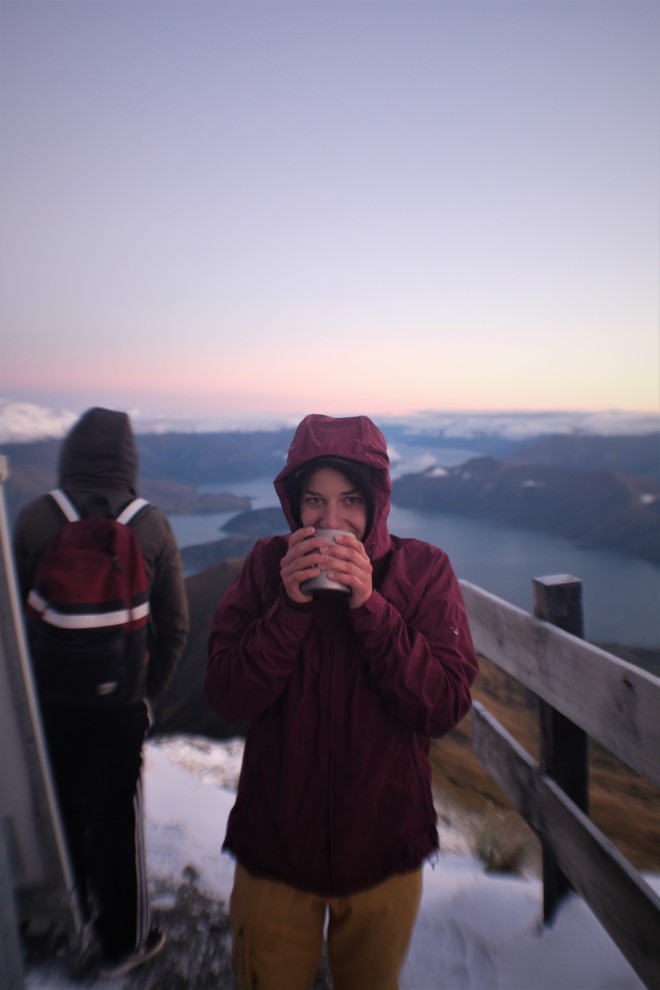 It was dark with a clear sky. In the absence of the moon we could see the outline of the horizon and twinkling lights of the towns below. The frigid wind chill soon rendered my gloveless hands unusable, and I surrendered to an unpixellated experience. Our group huddled up behind the weather station at the peak to seek refuge from the blistering cold, and soon warm coffee adorned our aching hands. Thirty minutes later we were joined by the second group to summit, a couple from France. They quickly requested shelter in our huddled-up coffee corner to stay warm, which we happily granted.

The sunrise was magnificent. Three days of cyclone ridden overcast yielded rows upon rows of mountain ranges dusted with fresh snow. The horizon transformed from dark blue to purple to red to orange, light consuming every inch of the valleys below, over which course our group of six had grown into thirty ambitious souls from around the world. A diversity of languages, and cameras, enlivened the summit. We took some pictures, enjoyed the view as the sun breached the eastern vista, packed up, and headed for departure – the trail we couldn’t find now decorated with fresh snowy footprints. 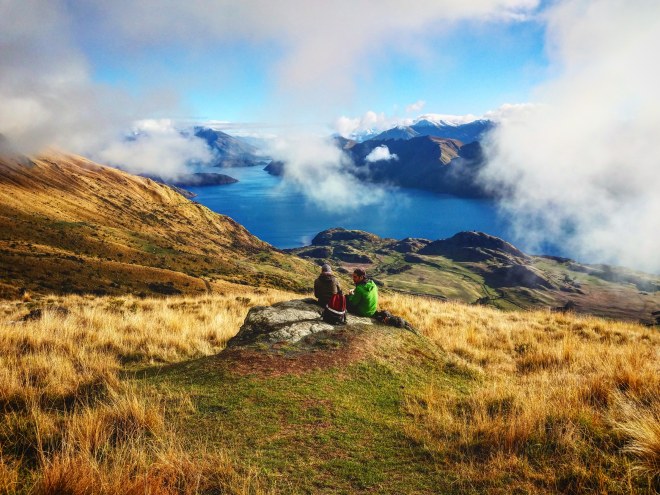 Descending was fun. We laughed and teased and tripped all the way down the mountain passing group after group of winded trekkers, stopping halfway down the track to enjoy a snack and reminisce on the morning’s death march. At 10 am, we arrived at the carpark – now overflowing with campervans and RVs alike. Our ambition, which had turned into effort, was now just a memory. It was a beautiful day – and it had only just begun. Kicking it lakefront that afternoon never felt so good.

The next morning, we quickly stopped at the grocery store to resupply for the three day hike up Matukituki Valley. The journey to the trail head was treacherous in our little Camry. Stream crossings soon turned into full-on river adventures, and gravel quickly turned into boulders – but luckily we made it in one piece, passing a graveyard of car parts along the way representing less fortunate souls. We parked the car, loaded the packs , and took to the hills. 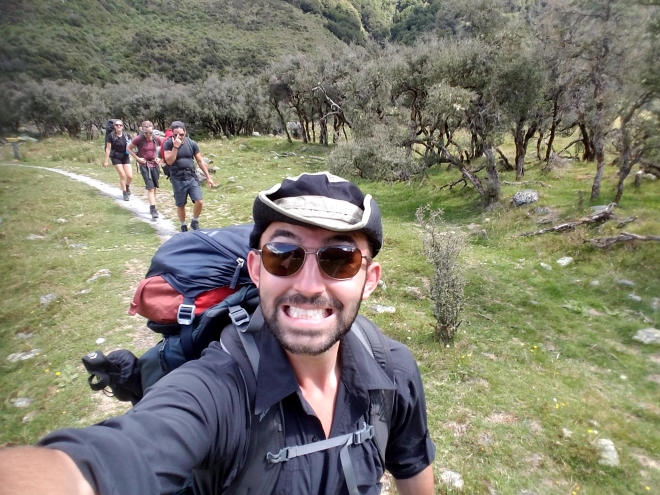 The hike up the valley was spectacular. Epic peaks and glaciers fell into nine kilometers of quaint pastured fire-roads intertwining with a turquoise glacial river. Livestock sheepishly skirted the trail offering numerous opportunities to attempt to start a stampede; all unsuccessful. Two hours later we found ourselves at Aspiring Hut, the halfway point to where we’d camp that evening. It was at this point that I felt my resolve start to wither. My pack became heavy and every step felt fruitless.

The next two hours were hell. I bounced between being upset with the weight of my pack, pace of my counterparts, distance we had to travel, and state of my mind. I projected and then injected and then introspected – and finally resolved that I was just out of shape and on a long-ass hike. The last kilometer of the trail entertained a 700-meter ascent to the Liverpool hut; a combination of climbing and clinging on for dear life. I was tired but this track wouldn’t get the best of me. Turns out we all survived; and while tired, even had enough energy to enjoy the view. However, all I could think about that night was how terrified I was to descend from this hut/death trap. Advanced track felt like an understatement – I can’t wait to do another.

The next morning I delayed getting up, much to my travel mates chagrin. I told them to go on – thinking they’d take me up on the offer. I had given up – I was scared and tired with well worn blisters. Much to my surprise, though, they stayed – and deferred the day’s plan. I was shocked and embarrassed, but entirely relieved – and very grateful. The hike down was actually fun on fresh legs – root clinging and butt scraping. I took pause at the bottom to thank my group – my friends. My mind had gotten the best of me the night before, but Melo, Janick, and Celiene helped me get the best of my mind. I got by with a little help from my friends. We made camp at Aspiring Hut that night and enjoyed a feast of instant rice and dehydrated lamb. 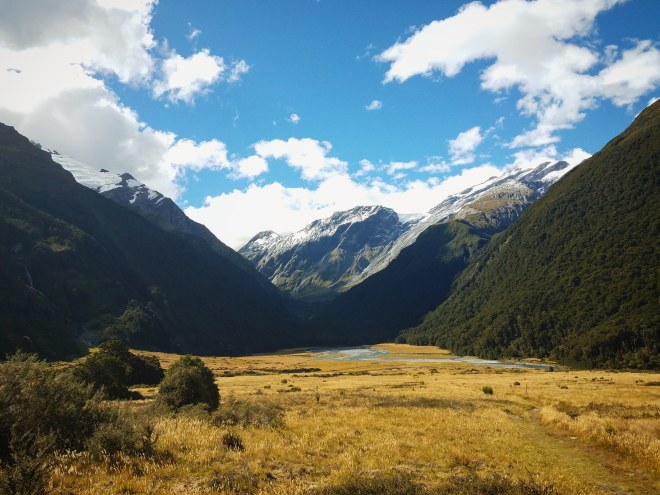 The hike out was hilarious. 100 kph winds with heavy rainfall found us often blowing around the track with our butts in the mud. An unfortunate soap spill from the night before left my pack soaked with dish soap – and I quickly turned into the pillsbury doughboy. Sheep tumbled across the fire road. Cyclones shifted into dust devils whipping the river around the track. Rain guards frolicked in the wind like neutral flags begging for an armistice. Everyone ambled on at a tilt trying not to fall – at points dropping down just to survive. And survive we did – with smiles on our faces and mud on our butts. We clawed our way to the carpark, loaded up the Camry, and hit the road ready to cross some rivers.

There’s only one river crossing on the road to Matukituki Valley that you should worry about, and on a sunny day it’s really not that bad. It was not a sunny day, however, and the waterfall feeding the now-river was raging. I had worried about this crossing on arrival as it had almost ripped off our front bumper and now we had to decide if we wanted to risk floating down the river or camp in the howling wind for the night. This was not a decision for a coin toss.

Fifteen minutes of stick probing and nervous pacing later I asked my travel mates to jump out, told them to jump into the river and push if we got stuck, and gunned it. Anxious spectators who had smartly parked in the non-4×4 lot had their cameras trained, ready to post “Camry floats away in New Zealand Fjord”. But we made it. The few who watched even applauded. I smiled and laughed, unsure how our little sedan managed a submerged engine bay. The rest of the flowing rivers felt like trickles compared to that initial crossing, tunes blasting and our heads bobbing. This was Melo and Janick’s first multi-day hike and would surely prove not to be their last.

We hit Wanaka, devoured giant burgers, bounced around town that afternoon, hired an AirBnB for the evening, and I made my travel companions a Mexican salad in celebration of their first multi-day hike as we watched the closing ceremonies of the Olympics. On our last day in Wanaka, we relaxed on the beach in quiet enjoyment – it was a spectacularly sunny day. My new friends were headed for Tekapo to meet up with two of Melo’s mates from home – and I planned to take a road trip up west coast. We resolved to meet in Queenstown five days later for Melo’s birthday and had a roadside goodbye. 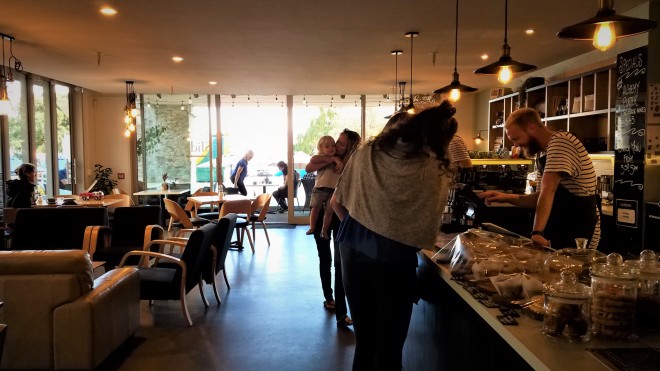 It was sad to say farewell to my new German friends, but I was ready for a solo adventure. My travel companions had challenged me physically and mentally – and I departed their company wiser, entirely content, and completely lost. So, I did what I do best – I found a cozy café and I began to write. Words poured from my fingers and my journey started to take shape on paper. Perhaps my blog would find some life after all. Interactions were starting to feel less sparse and more wanted, and I stumbled upon a satisfaction with having people in my life just for the moment. This is why I came to New Zealand – this is why I left my life back in the US.

Life enthusiast and culture connoisseur on the hunt for adventure, experience, growth, and connection. I decided to shake my life up in 2017 so I quit my job and bought a one way ticket out of the US - ready to explore the world. This is my journey - this is my bliss tramp. View all posts by Rafiki

One thought on “New Zealand – Chapter 3”