In the confines of a car, the open road can appear a captive or a catalyst for something great. The difference between the two is good music, a scenic drive, and a healthy disposition to enjoy a journey. Two weeks of solid connections left me wanting more but my keen eye erred to find one traveler along the entire west coast. Day one, I drove 500 kms from Queenstown to Franz Josef – making quick pitstops along the way to publish a post and jump off some cliffs. The drive was scenic, so much so that I forgot to check my speed and got a ticket going 70 kms over the speed limit which I still haven’t paid – whoops…

Over the course of the next three days, and 900 kms, I saw the best, and worst, that New Zealand has to offer. I stayed in an overbooked resort overflowing with kids from “Kiwi Experience” buses, perused through run-down Westport (a town that hasn’t changed since the Great Depression), fell asleep at the wheel in line to cross a collapsed mountain pass, and detoxed in a sauna at a delightful B&B in Takaka – all the while, enjoying the company of strangers, hitchhikers, hostel owners, and vagabonds. I met an artist finding purpose (searching for love), an environmental activist stumbling through her next chapter in the wake of love lost, a hostel owner rationalizing retirement, and a jewelry maker who appeared to be more a philosopher than a craftsman. I made rock jewelry and walked miles along empty beaches collecting perfect pebbles. I ran out of gas while debating the merits of nuclear energy with a cross-gender hitchhiker from Germany. I met locals and travelers alike and met them how I could – for once; instead of how I wanted. And, of course, I drove. And drove. And drove…

The road felt lonely, however. I missed my German muses, Melo and the gang, Tim and Becky, Neil, and Fish – my new friends. Somehow, I knew that the rest of my travels through New Zealand wouldn’t be as deeply connective as the past three weeks. The more I pondered on that fact, the more restless I became. There’s merit in allowing an excess of time to stumble upon connections when you travel; allowing days to bleed into conversations and adventures, moments into memories. For the first time in my adventure I was a solo-tourist – lost with a need to always be farther down the road. 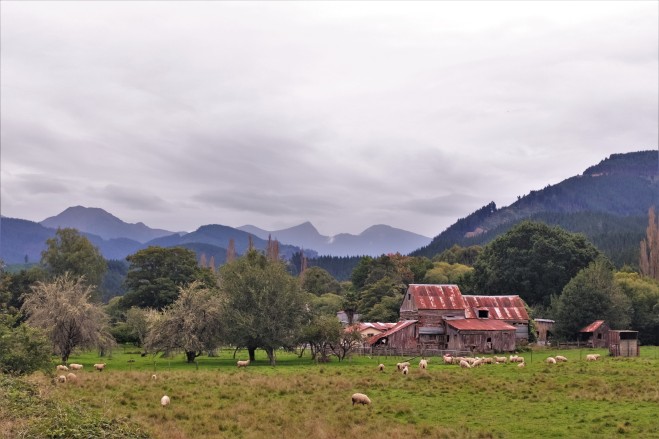 In an attempt to slow down and refind center, I opted to spend an afternoon in Motueka exploring the city and polishing rocks. I soon found myself grinding down quartz crystals into necklaces to gift to friends yet to be found. David, the rock smith, was keen to quickly get philosophical. We discussed how rocks are like people, and how each one acts differently under a grinder and drill. We discussed the merits of rocks as medicine and the vibrations we call life. We discussed art and love and energy. All the while I played the role of the novice, mused by this craftsman’s understanding of life. Perhaps David was just a crazy troglodyte but I felt inspired – and departed his workshop with the promise to return in one week to collect my creations.

I stumbled into a conversation with a social worker from Switzerland the night before I met David, who’s name I never caught. My initial intrigue in her quickly manifested into a healthy debate regarding quality of travel and fulfillment. I assumed the stance that quantity yields quality, purpose leads to perfection, action to adventure. She argued the opposite, that purpose is a derivative of the past, not an actionable future. That adventure is a disposition, not a destination. Smart girl; she got me thinking. We argued into the late hours of the night. Her parting words were to check out the Golden Bay, and with seven days to burn until my jewelry was complete, I didn’t have anything better to do.

The mountain pass to Takaka was destroyed by the prior week’s cyclones. Five large mudslides resulted in two crossings a day (7am and 5pm) which each took over three hours as the NZTA worked on rebuilding the road. The result was a quiet Golden Bay. Most shops were closed due to the lack of tourism – and the hushed main street of Takaka was largely occupied by the local bohemian crowd that camped in the woods full-time. I was finally off the main tourist path – mingling with locals.

I stayed at a B&B-Spa my first night in Takaka which also served as the local watering hole on weeknights. The Belgian owner urged me to jump into the sauna and I soon found myself surrounded by naked locals. Their playfulness and calm demeanors spoke to the quiet artsy lifestyle that so many in the area enjoyed. I was surrounded by farmers, craftsman, and bohemians alike. None of them earned much and only one was well travelled but their contentment was palpable amid giggling fits and acapella jam sessions. I couldn’t help but think “Where the hell am I?” Better yet, “What secrets do these hippies possess?” I fell asleep intent to fully explore and understand the Bay.

The next day, I drove the entire west and east coast of the Golden Bay, stopping occasionally to kick sand and skip rocks. I drove over 50 miles on dirt roads in my tiny Yaris searching for the local’s secret to life; always assuming it was right around the next bend only to meet another magnificent vista. A quick pitstop at a café in the middle of nowhere quickly yielded an hour-long conversation with an LA expat – we discussed politics and travel. Upon my departure, she bellowed out “you were my only customer this week” with a cracked smile. 200 kms and ten hours later I arrived back to Takaka, slightly perturbed that I had yet to discover the “local secret”. I parked myself at Telegraph Hotel, the local pikey pub, that night to contemplate my next steps.

I awoke the next morning to the hotel owner banging down my door, upset that I might miss checkout. I was disappointed at the lack of hospitality, but more upset that I didn’t have a reason to jump out of bed; this just wasn’t going to work, I needed something to do. I promptly grabbed a cup of coffee and strolled into the DoC in search of a local track to hike. To my surprise, Abel Tasman Coastal Track campsites were hardly booked due to track damage. Less than three hours later, I was on the trail again.

Each step down the track felt like a step in the right direction. As I climbed Gibbs Hill, I felt the pressure and pain of my discontentment from the past week start to bleed away. Soon my mind moved onto thoughts of the past, as if the track were an abusive therapist. I gave in to the strain and pain provided by each step and my too-heavy pack. My discontentment with the pain soon turned into gratitude for the ability to explore the wilderness. I felt myself transported back to Routeburn, Roy’s Peak, Matukituki, and all the prior month’s hikes. I felt bliss. And then I got lost….

Five hours into my hike and lacking a trail map, I found myself on Goat beach with no idea of where to go, turbulent waves crashing before me. It was growing dark quickly and two attempts to backtrack yielded no fruitful results: no trails missed, no signs, no markers, nothing. Shit. I parked my backpack on the beach and yanked out my GPS hoping to gain a bearing.

There was no GPS signal. There was no phone service. I had no map. I was lost. After two minutes of panicking, I found myself searching for a solution as the sun disappeared behind the horizon. I juggled thoughts of backtracking, making camp for the night, and wishing I had stored a bottle of rum for such an occasion. Surely some spirits would lift mine. At last I resolved to carry on down the beach, backpack in tow, in search of a safe place to spend the evening. It took about twenty minutes for me to accept that I was lost – at which point I was overcome with a sense of peace. Not a minute later did I catch a glimpse of the trail from the corner of my eye, hidden by the bush. I was walking the path the whole time, thinking I was lost. It was only after I accepted where I was, enjoying each step, that I saw where I had to go.

I threw on my headphones, unsure of how much farther I had to trek, and grooved out the entire six minutes it took me to stumble into my campsite for that evening. It was just around a bluff the entire time.

Sleep did not find me easily that night. It was a difficult day on my body and mind. I had journeyed over mountains and through forests; through blame and into acceptance; through misery, past mindfulness, and towards peace. I quietly whispered to ghosts of my past in the confines of my sleeping bag, attempting to make peace with 2017. I talked to my dad for the first time in months, hoping his spirit was close by. Hoping he could see his son travel the world. Hoping he felt loved. Hoping he was at peace. I received no answer except for a calm wind that teased my tent and eased my heart. I don’t think I was alone that evening; sleep found me easily after my prayers and I awoke to soulful glow.

My next three days on the trail can only be described as bliss. I hiked fast with strong knees, passing many, and enjoying the company of those that could keep up. I napped on beaches with crystal clear water, waking up to crisp ocean baths. I built a giant fort and stumbled into a hippy commune where I was able to nab a bottle of wine, which I promptly drank that afternoon. I made camp on sandy beaches and slept under a sea of twinkling starts as mist from nearby waves painted my tent. 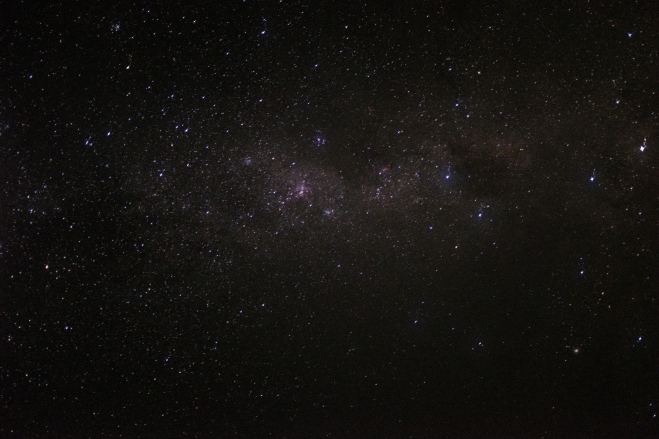 My last night on the Abel Tasman Coastal Track, I made camp on a quiet mile-long beach blessed only by my company. I danced and did yoga to the beat of the break. I spun sticks and made driftwood art. I built a camp I was proud of even though I was sure to depart the next morning, begrudgingly. I strolled the beach looking for purpose, only to find more sand. I enjoyed the solitude in peace with quiet. I tried to write but my company was more interesting than anything I could say. Damn, that was a great beach.

The hike out and fateful water taxi ride back to my car seemed like a blur as I was intoxicated with presence. Thinking back now, I can clearly recall every bend and step I took on that trek and everything that has happened since.

The four days I spent on the Abel Tasman coastal track were a turning point in my travels; perhaps, in my life. I seemingly stumbled upon secrets to being present and fulfillment within oneself. My solitude transformed from a fear into a privilege. My purpose transformed into self-fulfillment, through effort and experience. It didn’t matter what I would do with my last week in New Zealand – I was content. Rest assured, though, my newfound disposition wouldn’t detract from the experience. 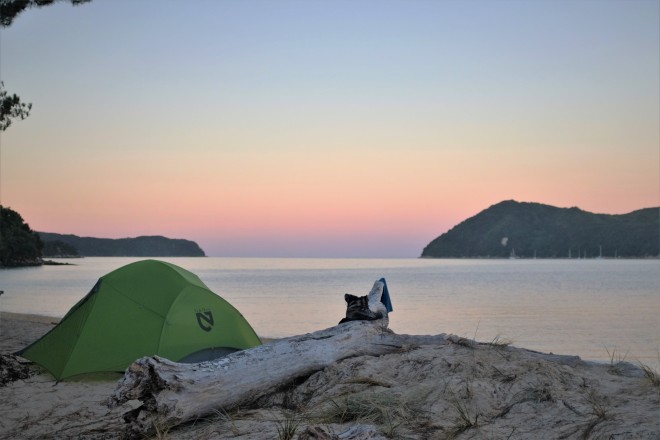